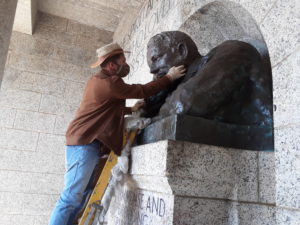 See all images below

The CJ Rhodes statue who’s head was vandalized by criminals on Saturday night of 19 July has been restored and welded back by Friends of Rhodes Memorial on Wednesday 23 September in time for Heritage Day 24 September.

The head weighing over 80 kg was found 50 meters away from the torso by a Friend of Rhodes Memorial in low scrub-three days after it had been cut off, and handed over to SANParks for assessment. During this time The Friends made appeal to SANParks for its restoration and offered a solution to place it back. At first The Friends were told that the head would not be returned, and it might well end up in a proposed ANC inspired theme park. Through persistence The Friends pushed for a petition as well as put pressure on the Western Cape Heritage and Cape Town City to get the head back. During this time it was learnt that a local ward councilor and police knew the names of the vandals and would come forward in due course.

In addition to restoring the head the 3 sculptures at Rhodes Memorial have been 3D scanned and replicas have been made as a replacement to the sculptures if ever removed. Additional international trends of anti vandalism measures including the filling of industrial cement and iron in the statue -as well as the installation of a GPS tracker and other electronic alarm gismo’s with long life battery installed.

When approached, Gabriel Brown of Friends of Rhodes Memorial stated that “we are well pleased that the Friends of Rhodes Memorial membership has grown tremendously lately, the Monument is visited by 100’s of thousands of people from all round the world and locals from all walks of life, races and religion, they are all brought together by a sense of peace, harmony and nation building. Rhodes Mem is one of the finest monuments in the world and it here in Cape Town. To perhaps give both parties for and against Rhodes perhaps we could have 2 plagues on either side of the bust, the good and bad side of Rhodes, but the bust of Rhodes must stay.

To remove the Rhodes sculpture would be an admittance of gross failure by the ANC government for striving reconciliation- and would censor or take away, rather than adding a needed historical narrative. In 2003 Nelson Mandela praised Rhodes in a Rhodes-Mandela Trust speech entitled : “My common cause with Cecil Rhodes”.  “We see the Mandela Rhodes Foundation as a significant initiative within that broader framework of South Africans taking responsibility for the transformation of their society so grievously skewed by a history of colonialism and apartheid,”  “We shall once more take hands across historical divides that others may deem unbridgeable,” he said.

Either way the history of Rhodes incredible vision and deeds will long outlive the currently morally corrupt ANC and EFF as it did the National Party.

As an individual who ran the equivalent of Western, Northern and Eastern Cape’s, Zimbabwe, Malawi and Zambia and the worlds monopoly on diamonds he gave more to South Africa in terms of wealth, and industrial leap forward, while shunning British Imperialist rule in favour of a self rule South Africa. Rhodes preferred to live in a miners shack in dusty Kimberly or the South African veld. Rhodes died in 1902, just 49 leaving his entire fortune and vast estates including UCT, Kirstenbosch to South Africans of all races in order to prosper.

If you need any more information, hires images or video clips please contact us on info@friendsofrhodesmemorial.co.za Thank You. 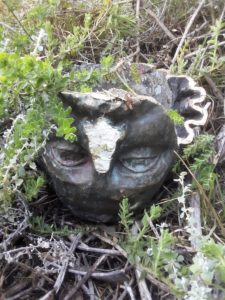 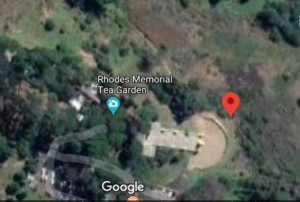 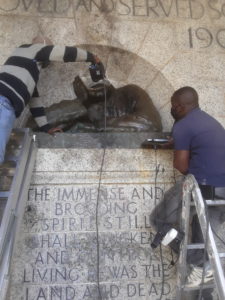 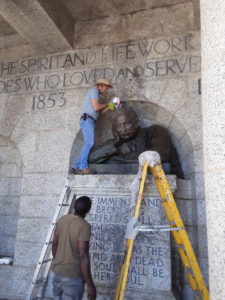 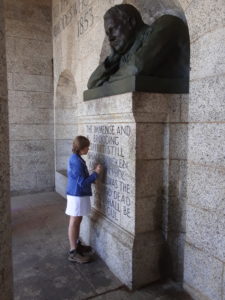 You may have missed

Heads Up! CJ Rhodes head back on statue